Our Roots in Maine

Surf Camp was founded in 2001 and has run summer camps and surf lessons on Scarborough Beach ever since. As a family-owned and operated summer camp, we have built a team of passionate camp counselors and surf instructors that will make your experience stand out.

With a passion for the ocean and surf experience from every corner of the globe, our team brings together decades of ocean knowledge along with experience in teaching and outdoor education. Thanks to many years of dedicated water time, our team fosters a safe environment and all of Surf Camp's full time instructors are certified in Lifeguarding, CPR, and First Aid. 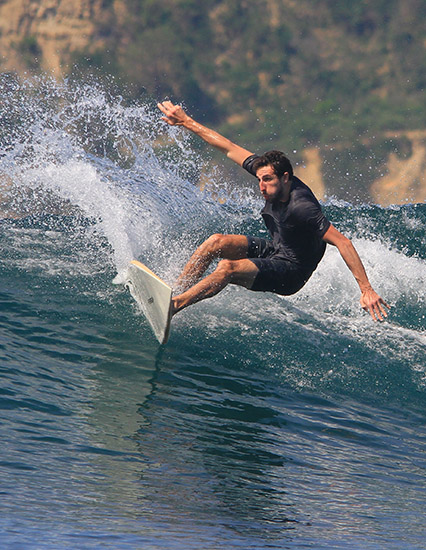 Dustin has been running Surf Camp as the Owner and Camp Director since 2012, prior to which he was involved with Surf Camp alongside his dad, David Turin, since 2001.

Dustin learned to surf in Maine with his dad and has spent much of the last two decades traveling around the world to surf.

When Dustin is not running Surf Camp, he also owns and operates SoPo Handyman and has worked in academic publishing for over a decade. He earned a Master's Degree in Political Science from Northeastern University and lives with his wife and daughter in South Portland. 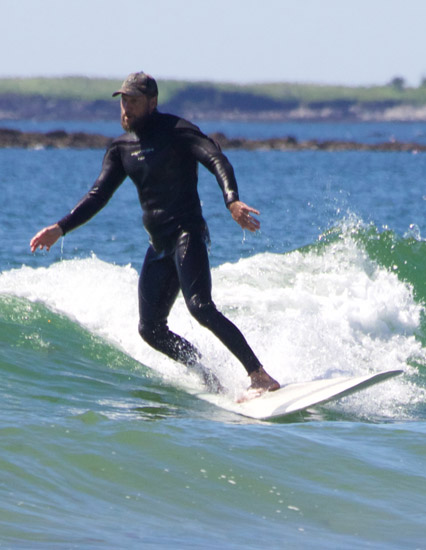 Bill has been surfing for 25 years, riding both a longboard and a shortboard. Bill surfs in all conditions, including the brutal Maine winter, and has experience throughout New England, California, and multiple visits to Costa Rica. He has been teaching at surf camp for over 15 years.

During the off-season, Bill teaches at Scarborough High School. Bill was a competitive swimmer at University of Maine, where he obtained his M.A. in Special Education. He has two daughters who grew up around camp and now are part of the Surf Camp team. 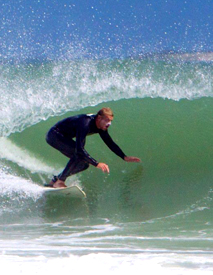 Chris has been surfing for over ten years and learned right here at Scarborough Beach. He has experience surfing along the coast of South America, Panama, Costa Rica, California, Baja Mexico, and Israel. After college, Chris moved to northern Chile where he enjoyed the endless sunshine and undeveloped coast for a few years while teaching English.

When he's not surfing, Chris teaches at Scarborough High School and enjoys spending time with his wife and two children reading, biking, playing volleyball, and -- best of all -- making 7+ ingredient sandwiches! 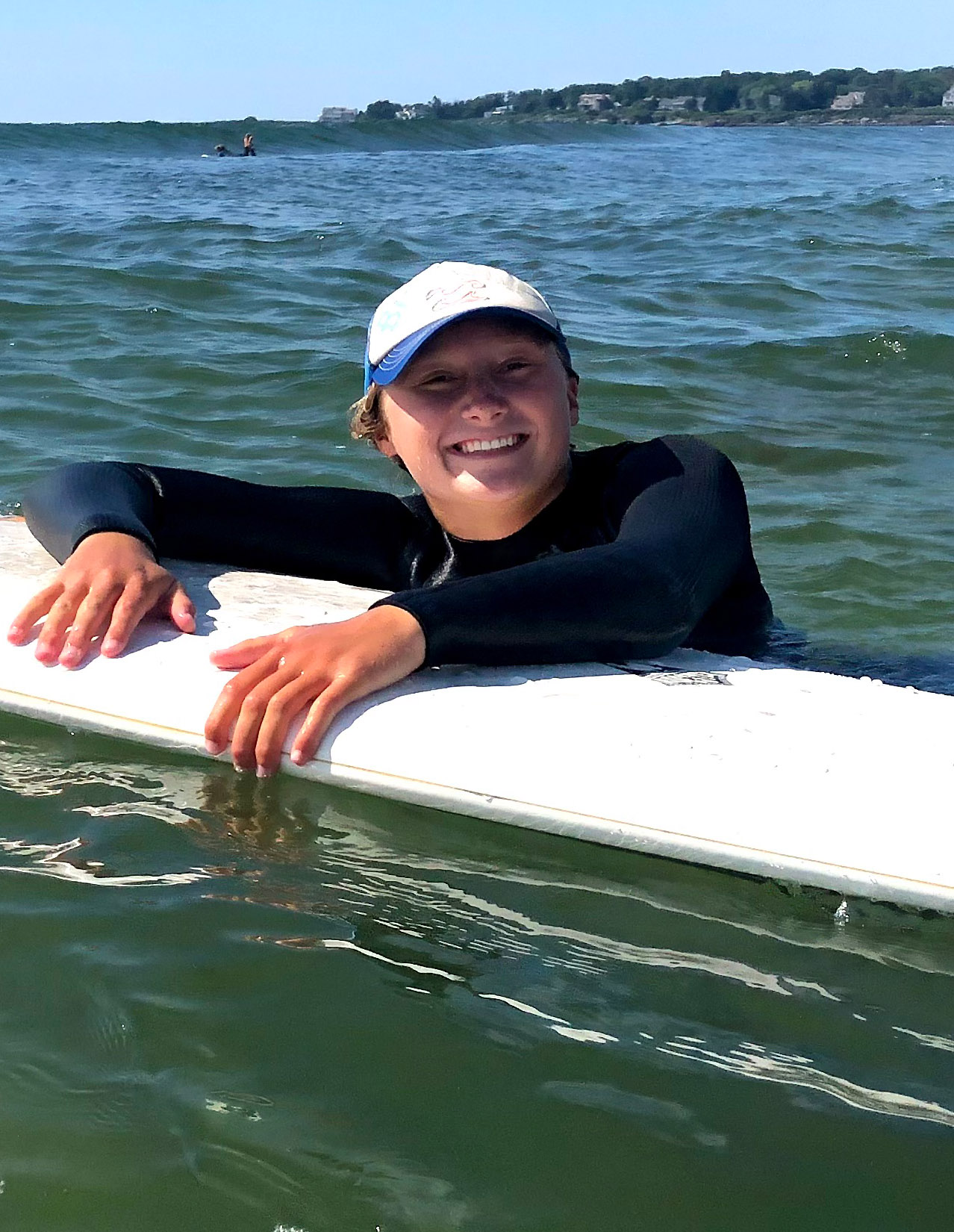 LiLi has been surfing at Scarborough Beach with Surf Camp her whole life. She loves the ocean and being a part of the Surf Camp staff. She enjoys diving with her family, swimming competitively with the Westbrook Seals, and playing field hockey for her high school in Scarborough.

LiLi has also surfed all around Maine and Costa Rica. She looks forward to teaching surfing each summer and can't wait for the next swell! 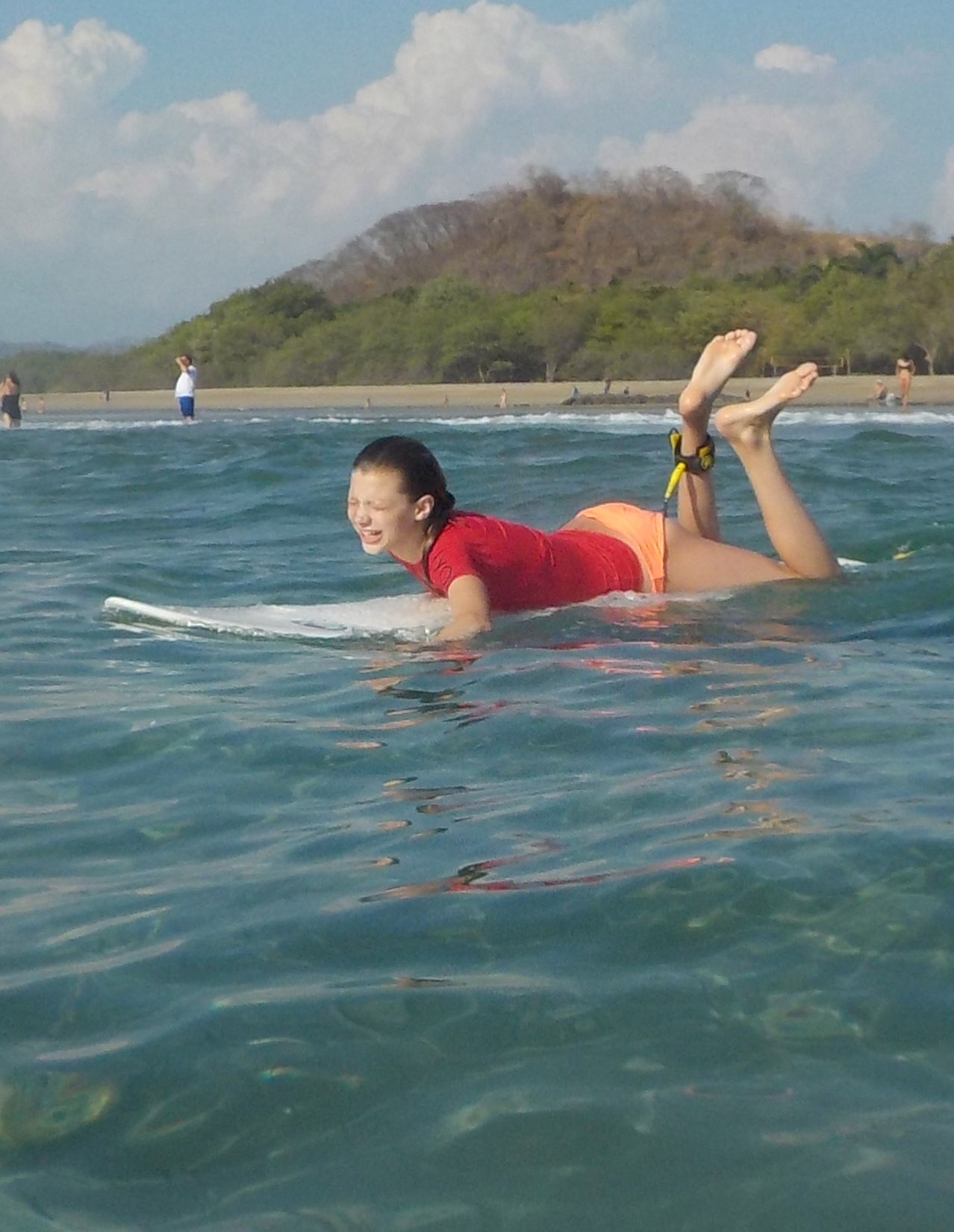 She considers Surf Camp her family and can't wait for each summer so she can meet new campers and teach them how to surf and have fun playing in the ocean. Daisy has surfed in Maine and Costa Rica. 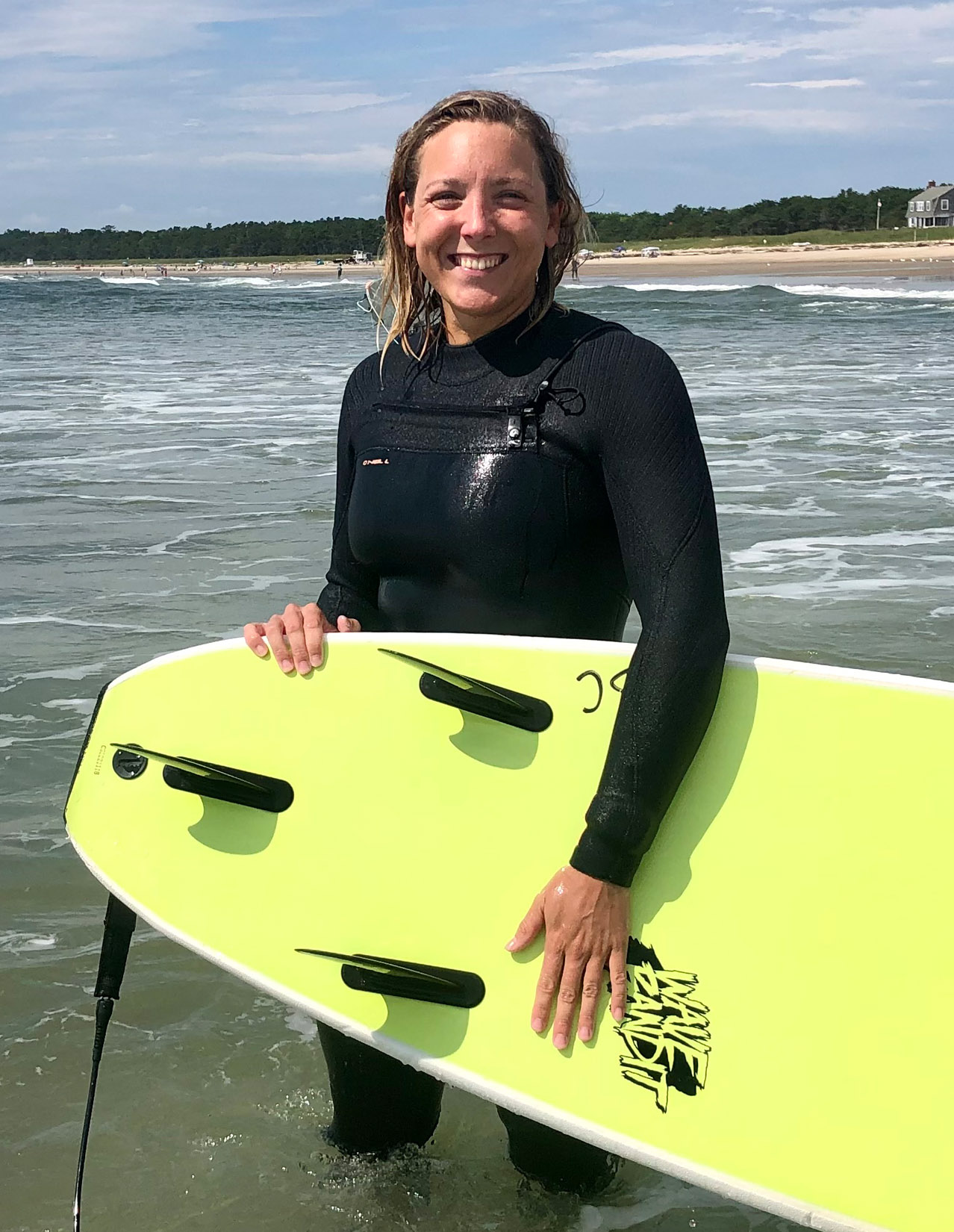 Christine is a local of the Scarborough area and has been working with Surf Camp since 2019. She brings a passion for the ocean, working with children, and teaching to our team.

Outside of the summer, Christine is a science teacher at Scarborough High School and lives locally with her husband. 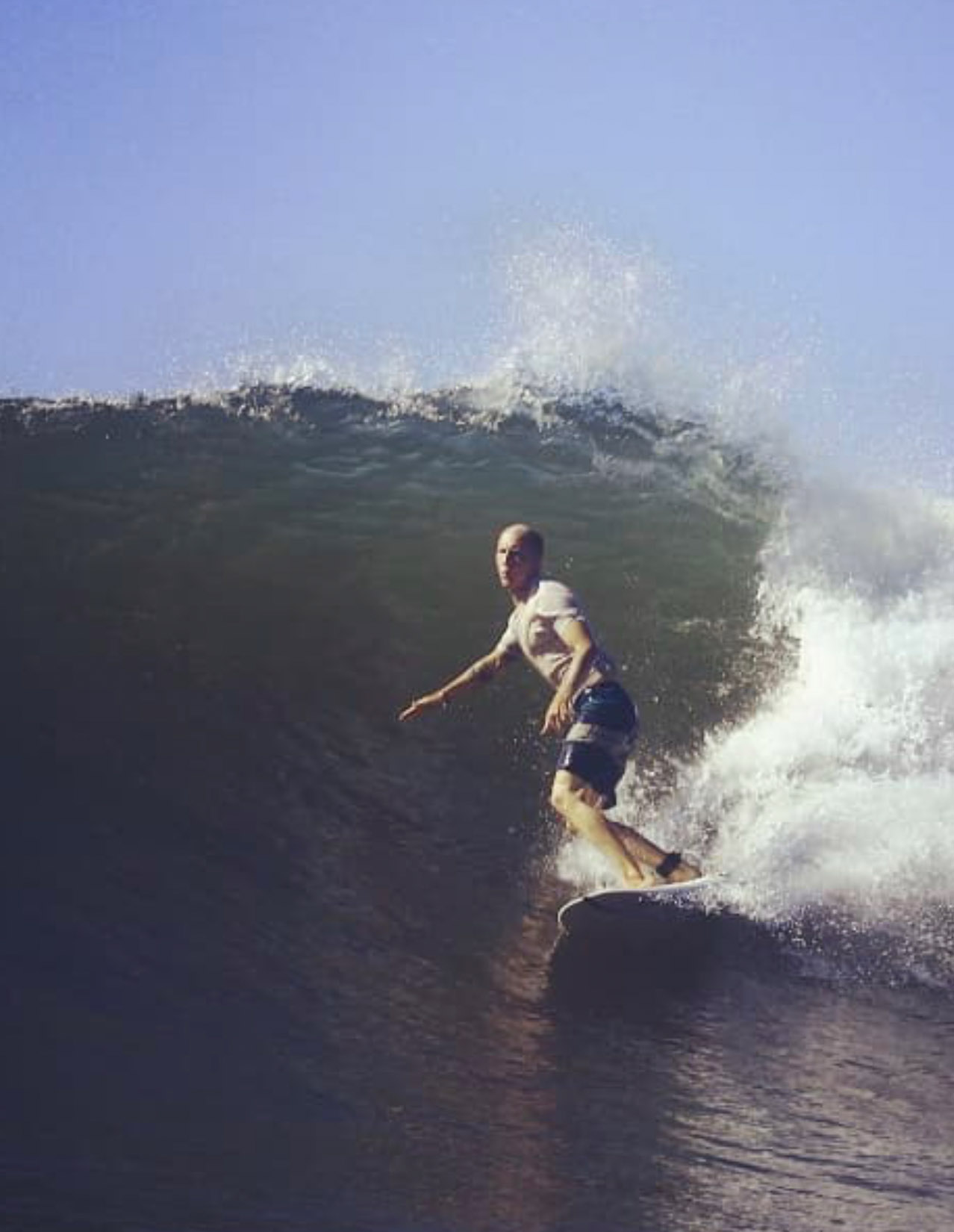 Ben started surfing in college when he and Sawyer became roomates at the University of New Hampshire. After graduating with a degree in Biology, Ben has worked with us on and off since 2013.

In 2014 and 2015, Ben joined the Peace Corps and was assigned to a village in rural Nepal. In the middle of his two year assignment, Ben escaped for several weeks to go surfing in Bali and Lombok with Dustin. Ben currently works in the non-profit sector. 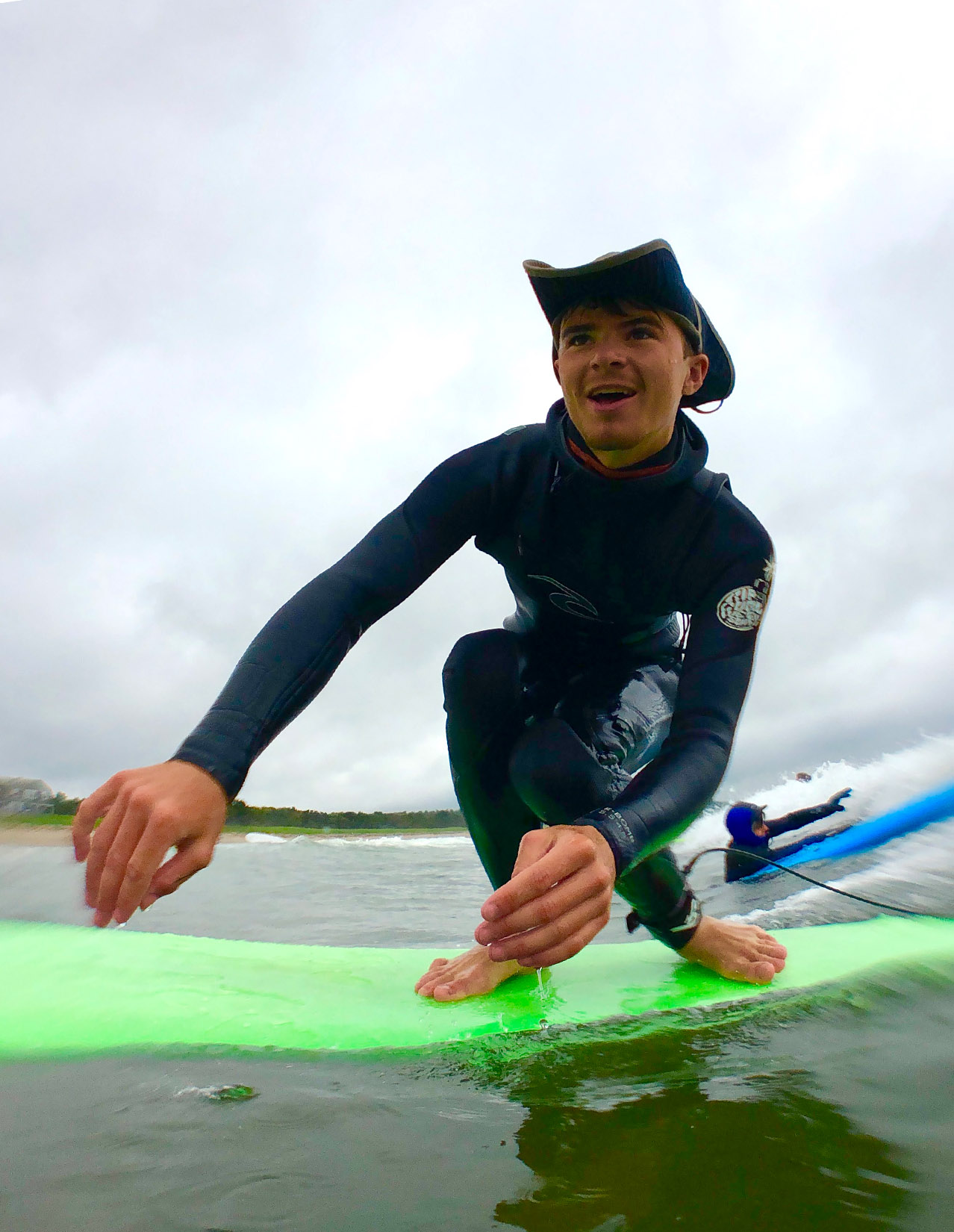 Luke first learned to surf at Surf Camp and now has been a part of our team since 2017. Luke's passion for surfing has only grown over the years and his interest in the ocean and outdoors, along with experience as a lifeguard, makes him a valuable addition to the Surf Camp team. 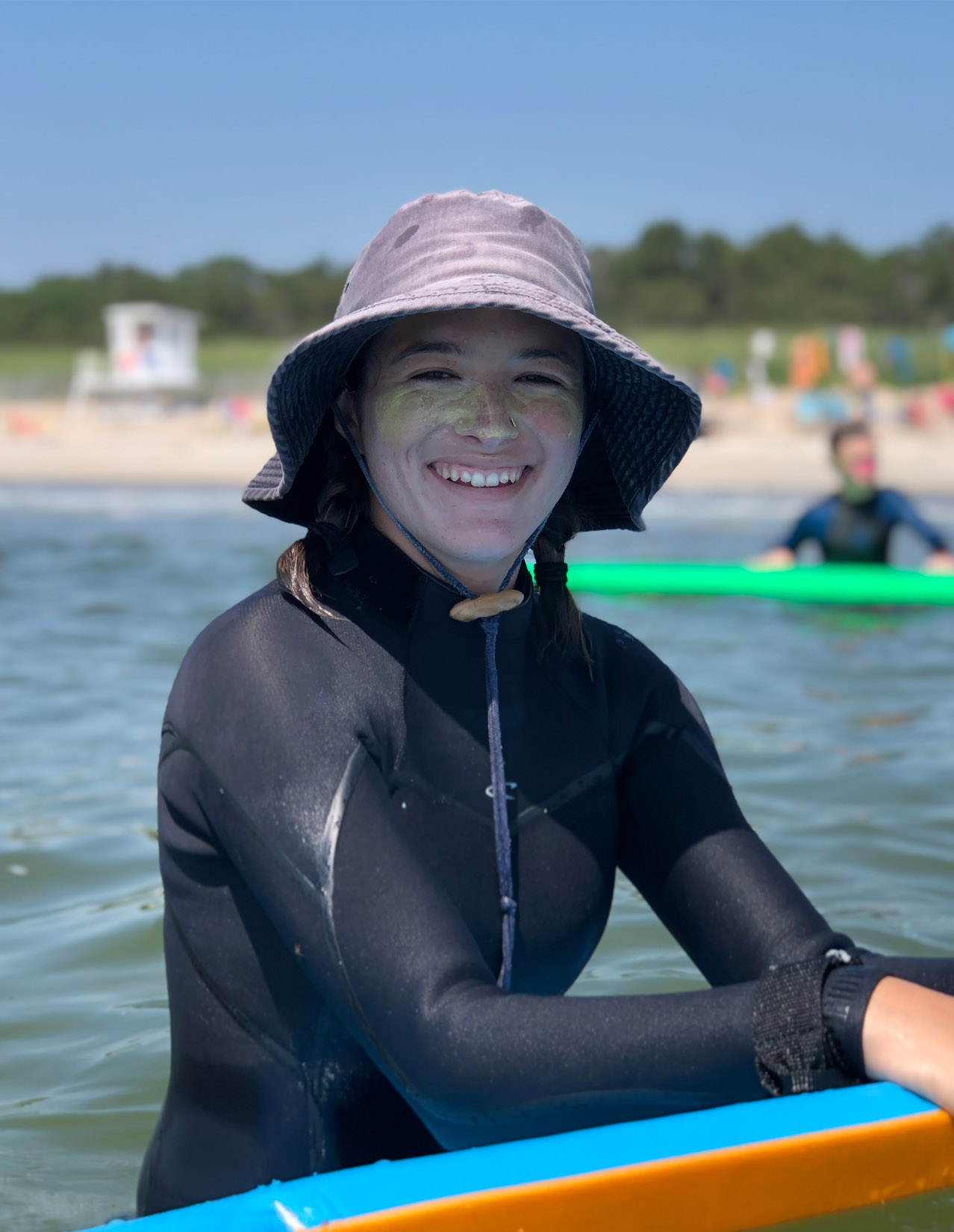 Michaela has been working with Surf Camp since 2018. She she has many years of experience in and around the ocean along with a skill for working with kids of all ages. 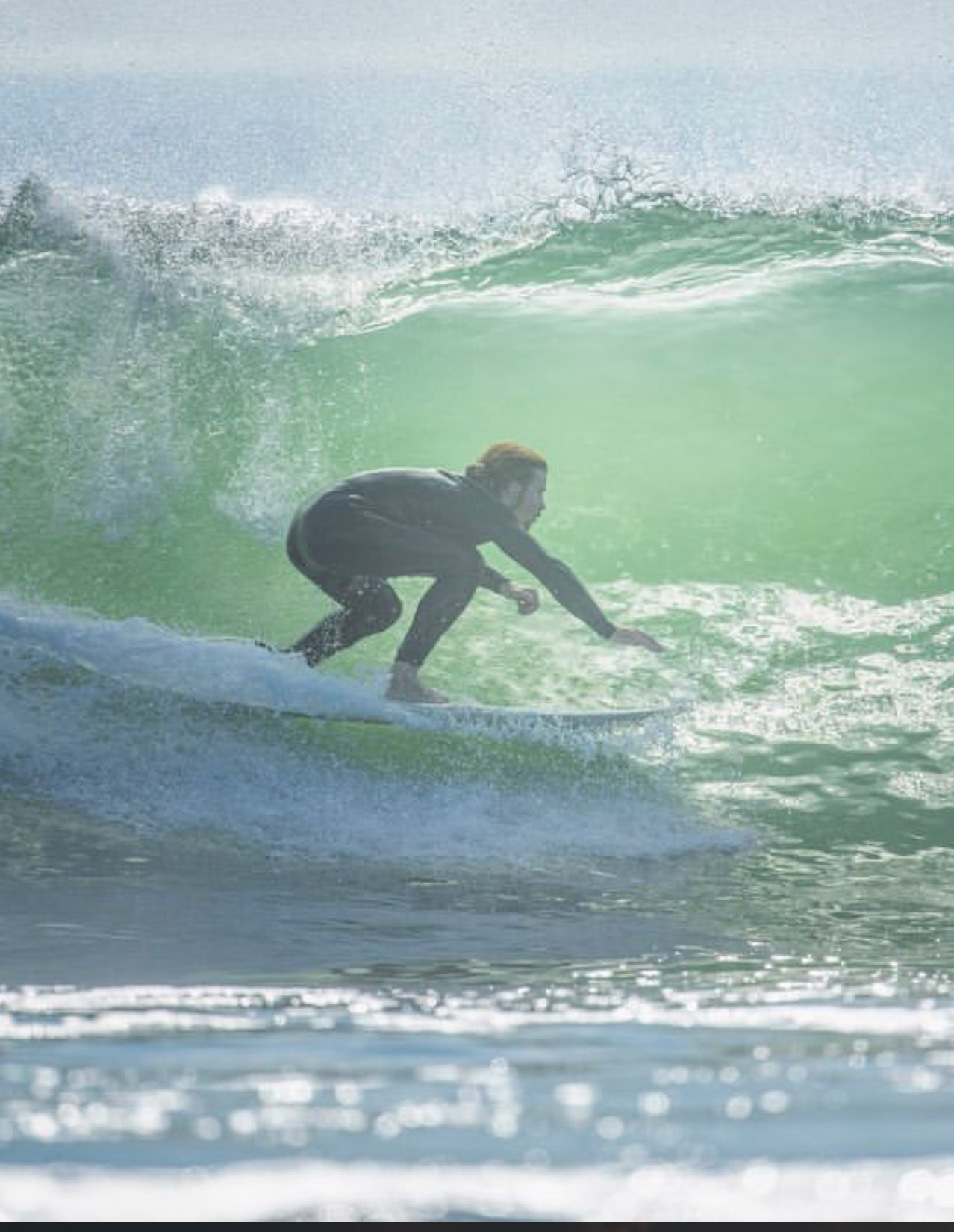 David joined our team in 2019 and brings an interest in teaching, experience as a lifeguard, and a strong passion for the outdoors to Surf Camp. He is an avid surfer along with his brother Luke and is currently completing his first year of student teaching in a local school system. 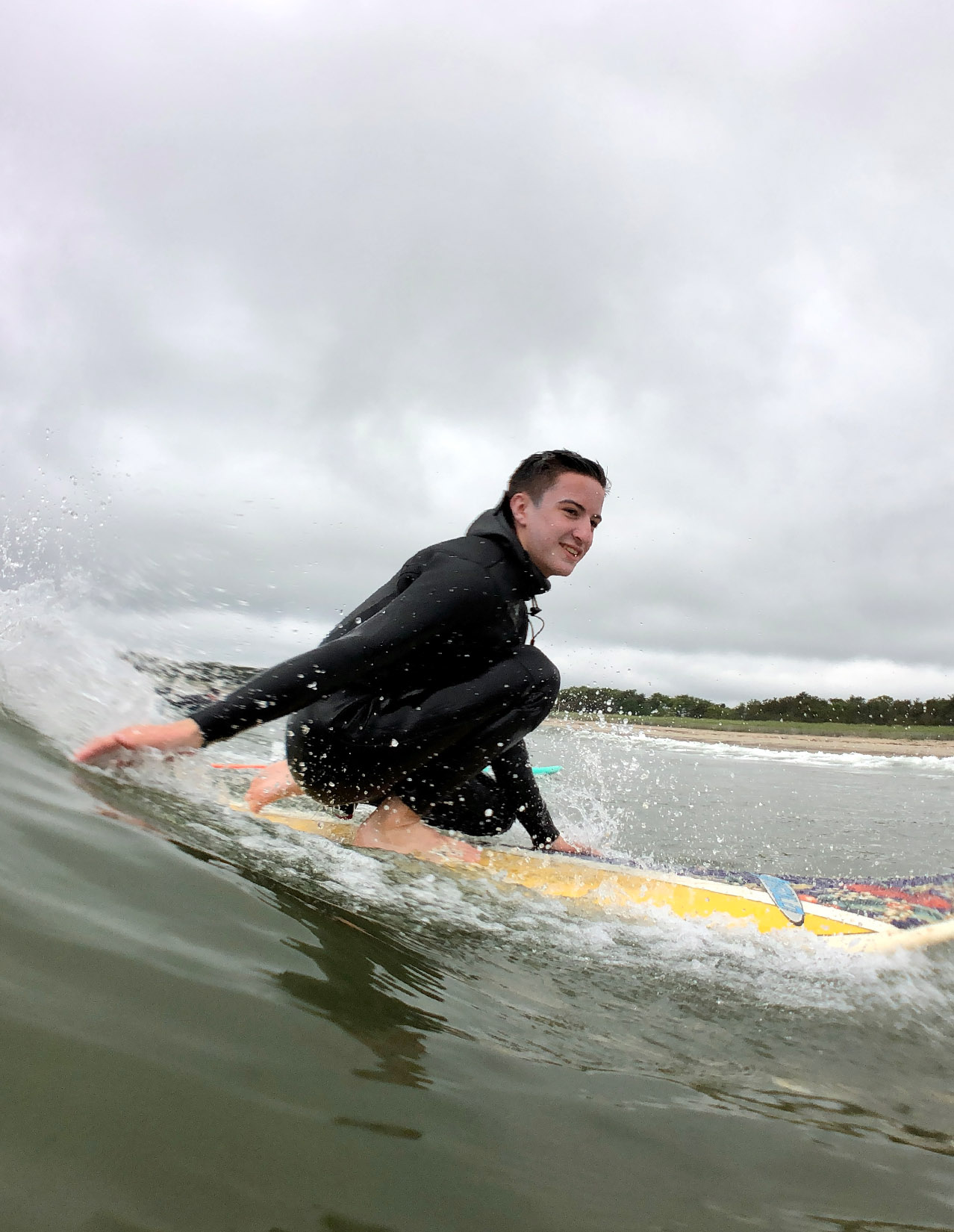 Nevin grew up attending Surf Camp and joined our team as a surf instructor in 2018. He enjoys winter surfing at Old Orchard Beach in the off season and is planning to start college in 2021.

Max grew up visiting Surf Camp and picked up surfing again after attending college in North Carolina and moving back to New England. Along with his water skills, his aptitude as a teacher and inspiration to kids makes him a valuable member of the Surf Camp team. He lives locally with his wife and is currently continuing his education in the field of computer science. 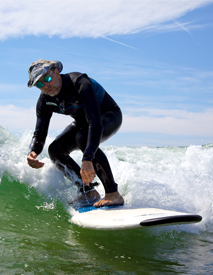 David founded Surf Camp in 2001 and has been surfing for over 25 years. He mostly longboards but also picks up a shortboard when conditions prevail. David learned to surf in Maine at Higgins Beach (just down the road!) and has surfed in Fiji, Costa Rica, and South Africa.

The idea for surf camp originally came from teaching his own four children to surf and then visiting a surf camp in California. David has been a windsurfing teacher, a scuba diving guide, and a licensed sea captain as well as a restaurant owner and chef of three decades. 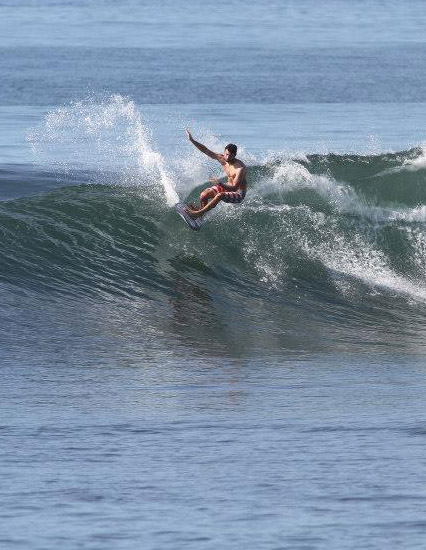 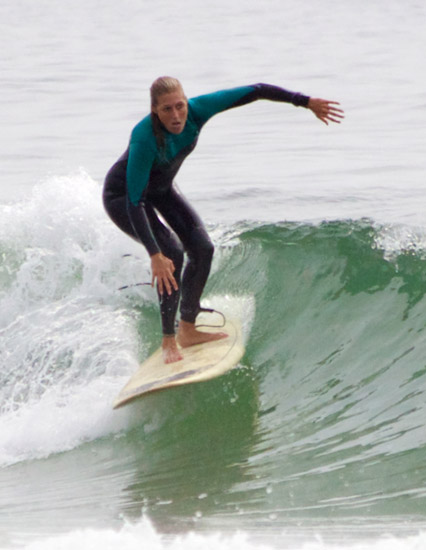 Emily has been surfing her long board for 20 years and is a perpetual athlete. She was a member of the crew team at Endicott College where she graduated with a degree in Physical Education and fills her time with surfing and skiing. 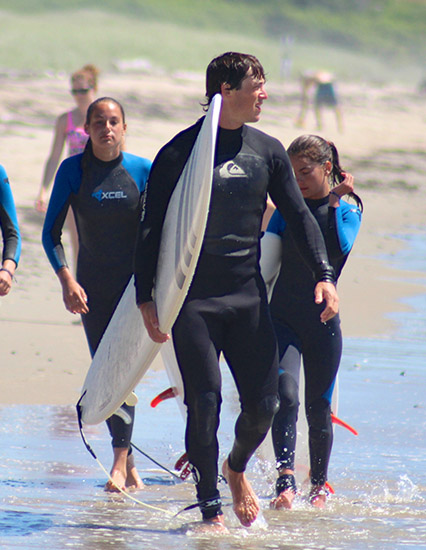 A Massachusetts native, Justin has been surfing for 10 years. A well rounded athlete, he played 4 years of football at Endicott College while completing a degree in Exercise Science.

After years of coming to Surf Camp as a kid, Kyle returned to work at camp as a surf instructor in 2015. In addition to surfing on and off for many years, Kyle is a talented guitar player and song writer.

Kyle went to Scarborough High School and more recently studied liberal arts at Southern Maine Community College. When not at Surf Camp, Kyle also works at a restaurant and pursues his music. He can also be found riding his bike all over town! 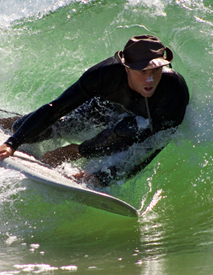 Dave worked with Surf Camp for over 10 years and now specializes in teaching adults in our Adult Surf Camp program in addition to surf lessons, and when he's not teaching surfing he spends the winter teaching ski lessons at Saddleback. Dave loves to travel, but in the end prefers Maine's cold water to the warmer climes. 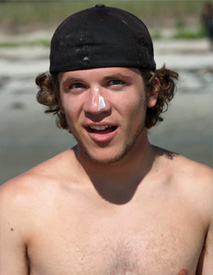 Brendan has been surfing for many years and is proud to be -- if not the only goofy-footer in Surf Camp -- by far the goofiest! He graduated from Cape Elizabeth High School in 2008 and is currently a Sports Business major at the University of Southern Maine. Brendan, known more frequently as "B-Man," also enjoys tearing up the pavement when the surf goes flat (along with the rest of the camp staff). If you need someone to carry your board and dripping wetsuit at camp, just ask Brendan because he'll always have your back. Brendan is a certified Lifeguard and holds additional certification in CPR and First-Aid; this will be Brendan's 6th summer with Surf Camp. 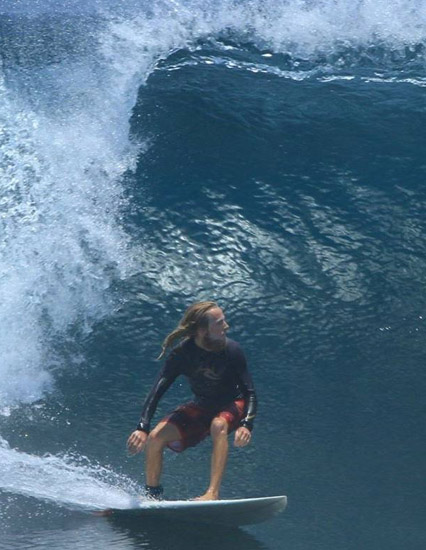 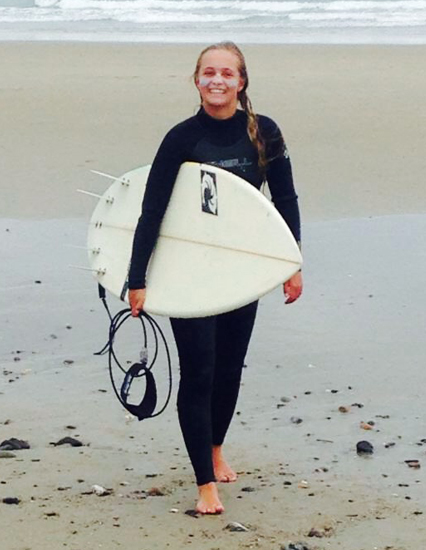 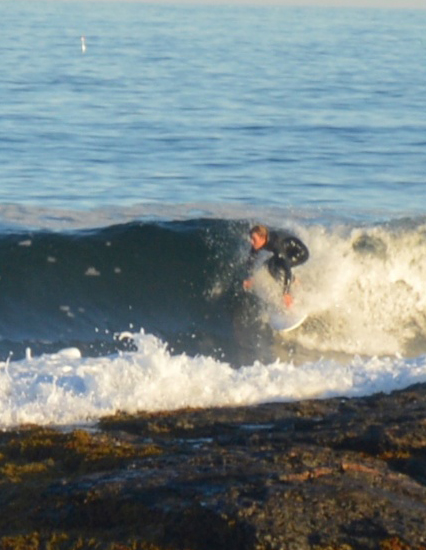